Things Are Not Always What They Seem

“The Fed is both arsonist and firefighter.”[i]

The pandemic-defying stock market hit an all-time high in the third quarter, despite an economy that continued to struggle to fully rebound. The Federal Reserve (Fed) once again fueled the fire. First, it announced it “will seek to achieve inflation that averages 2 percent over time.”[ii] Considering inflation has been well below 2 percent recently, in practice this means the Fed claims it will allow inflation to increase to over 2 percent in the future. Then, the Fed announced it expects the federal funds rate to remain near zero through at least 2023 (see “Thoughts and Observations on Inflation” in the next section for more on this).[iii]

While the Fed will ultimately be the one called upon to put out the (inflation) fire, for now it has helped thrust the stock market to new highs in the short-term. Importantly, the Fed didn’t do anything to increase sustainable earnings. Instead it simply encouraged a further increase in the already expensive (or perilous) multiples that investors are willing to pay for any given level of earnings. In fact, price-to-earnings (P/E) ratios have seen the greatest six-month expansion in 30 years.[iv] Thus, some investors clearly believed the Fed gave the “all clear” signal to take on risk without any consequences. But things aren’t always as they seem in the investment world.

Shortly after the Fed’s first announcement, stocks began to retreat in early September. The main reasons for the correction seemed to be related to U.S. politics, another round of COVID-19 cases, and sky-high valuations. Entering the third quarter, market expectations for another round of fiscal stimulus, including another “check in the mail” and extended federal unemployment assistance, were elevated as both political parties were seemingly in favor of more fiscal stimulus. Fed Chairman Jerome Powell even tried to convey the importance of passing more fiscal stimulus by telling Congress, “The power of fiscal policy is really unequaled by anything else.”[v]

However, in the quarter the economy slightly improved and Supreme Court Justice Ruther Bader Ginsberg passed away. These two events extinguished any hopes of another immediate fiscal stimulus deal. Making matters worse for the economy, COVID-19 outbreaks continued to occur in parts of Europe and the U.S.

While we don’t foresee another U.S. economic shutdown, consumer behavior still appears negatively affected by the virus. This stimulus delay and cautious consumer behavior are major concerns, because the economic recovery began to stagnate in the middle of the third quarter.[vi] Without further stimulus and a confident consumer, it’s possible the economy falls back into recession again. The last time we saw a close election amid a declining economy was October 2008 to March 2009, when stocks plummeted and didn’t bottom until one month after a nearly $1 trillion stimulus package was passed in February 2009.[vii]

Valuations were quite attractive – and investors despondent – at that time. Today, however, valuations are already so high that many respected asset managers are now forecasting negative real returns (i.e., after subtracting inflation) for U.S. stocks and bonds as well as many of their foreign counterparts over the next 7-12 years (see GMO’s 7-Year Asset Class Real Return Forecasts chart). This is a very long time for most investors to not make money, especially those that may need to access their investments during that time. Based on this, a long-term strategy that simply owns a diversified basket of stocks and bonds is unlikely to deliver success. Yet, we believe these assets will offer many medium-term profit opportunities for the patient and nimble investor.

This is one reason why we choose an 18-24-month medium-term horizon for much of our dynamic investment process. While we base our neutral allocations on a longer-term outlook, we over/underweight different asset classes based on the medium-term.  We analyze various factors, such as interest rates, fiscal policy, lending conditions, and employment, that can influence medium-term performance. But we always choose to start with valuation. Because if you pay too much for something, it’s tremendously difficult to overcome that mistake. No matter how you look at it, valuations stand at levels that are historically consistent with meager-to-negative long-term returns.

Bullish investors are seemingly counting on a barrage of positive future news, including an uncontested election, passage of another round of huge fiscal stimulus, the successful development and wide distribution of a COVID-19 vaccine in the near future, and continued easy monetary policy where rates stay near zero for the foreseeable future so valuation multiples can stay sky high forever. While we recognize that each of these individual events may occur, we believe the market is pricing in perfect outcomes on all fronts and risks are decidedly to the downside.

Since we believe it is in your financial best interest to steer clear of potential massive portfolio losses that would give back years of gains, we remain cautiously positioned. We understand that having such a dynamic investment process will sometimes result in short-term performance that trails some market indexes. However, as we continue to balance your interest in both relative as well as absolute returns, we remain confident this cautious positioning will enable us to invest in new and attractive investment opportunities that we believe will come. 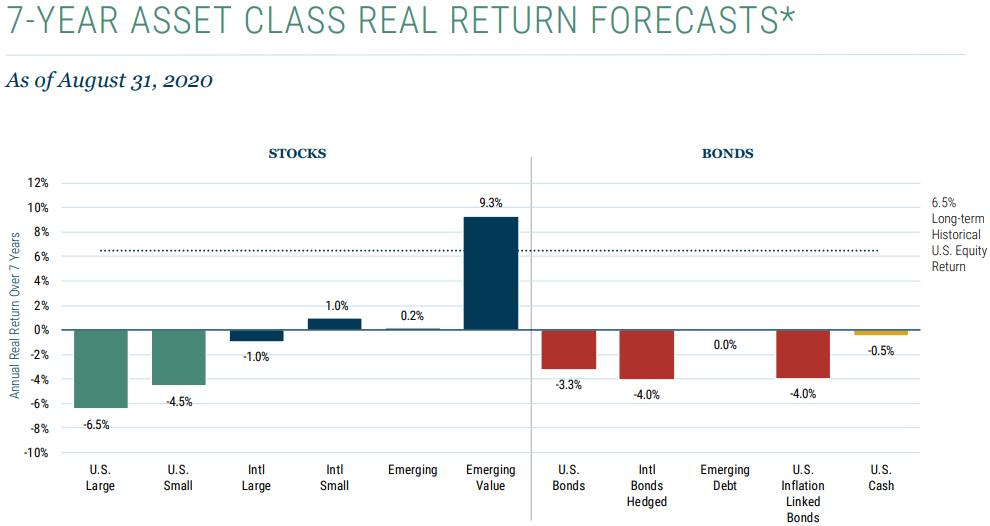 Thoughts and Observations on Inflation

The Federal Reserve, in its ongoing effort to stimulate our economy through monetary policy, recently announced it would let price inflation run above its target of 2% for an unspecified period of time in order to achieve average inflation at or above that level. This is a fairly significant policy change versus simply targeting 2% inflation.

The last time we had inflation above 2% for more than a year was 2008.[1] By expressing a willingness to let inflation run “hot”, the Fed hopes to create higher inflation expectations that could become self-fulfilling (people expect higher prices…thus higher prices materialize). If or when inflation starts to appear and investors begin to believe it’s here to stay, bond yields will likely rise, bond prices will likely fall, and one of the equity market’s major supports is likely to weaken. For this and many other reasons, it’s important that we understand what inflation is really doing.

The concept of price inflation is quite simple, but measuring it accurately is quite challenging. The U.S. economy is very dynamic, and consumers are intelligent spenders. Consumers actively make spending decisions based on quality, value received, and available substitutions that are difficult for statistics bureaus to measure accurately and in real time.

Most countries update their Consumer Price Index (CPI) baskets of goods and services and the weights of each therein only once a year. In the U.S., the last update was December 2019 and used certain data that was a year old, before anyone was working or studying from home. According to one recent study[2] on the U.S. CPI expenditure basket, groceries represent less than 8% of household expenses while transportation gets a 15% weighting. Looking at credit card transactions, the study concluded that the average household spending on those two categories is now likely reversed. Additional design features, such as using “Owners’ Equivalent Rent” as a proxy for real estate prices, also may be impacting the overall inflation statistics.

In addition to measurement challenges, the balance of spending on goods and services and the Fed’s relative ability to influence pricing in the two categories are quite different. Since the late 1990s, goods prices have been held down by increasing imports, large-scale domestic discounters, and internet-based retailers with different cost structures. Meanwhile, competition, high levels of differentiation, and difficulty in comparison shopping appear to have given service providers more relative pricing power and driven price increases in the services category.

Unless trade tensions or some other factor begins to affect goods prices, it seems unlikely that the Fed’s latest policy adjustment will have greater influence on the prices of goods than previous policy has for the last 30 years. Services prices, on the other hand, have been rising at or above the Fed’s targeted rate. So, the Fed’s policy appears to be stoking inflation where it can have an effect. Put services prices together with food and energy, which are excluded from the core inflation measurement yet are a meaningful part of consumers’ living expenses, and you would be challenged to find any American who’d tell you there’s no meaningful inflation in their lives.

Consumers’ experiences notwithstanding, financial markets’ preferred measure of prices has been running in the range of 1.5% to 2% for the last few months. Though not yet at the previous target of 2%, and certainly not above it, this pace could possibly become a challenge to the Federal Reserve’s indications, and the market’s perceptions, that short-term interest rates will be held near 0% for years to come. It could also become a challenge to the resulting super-low longer bond yields on which high equity valuations may be perched.

Price inflation may be starting to show up in the data. If investors begin to believe inflation is back and the Fed is not likely to stop it for some time, it would be reasonable to expect significant selloffs in both equities and fixed income. Both appear priced near perfection, which does not allow for higher inflation.

Please see the links below to review important disclosure information