The world has changed, but people haven’t changed, and the mind hasn’t changed.[i]

After suffering the sharpest price drop in history during the first quarter, the stock market staged a furious rally in the second quarter. However, investors should be careful about reading too much into these gains. The decline was so acute during the first quarter that the recovery has seemed especially positive. The S&P 500 still stands about 8% below where it was when the bear market began, and other indexes have double-digit losses. Further, it’s hard to ignore that the rally was concentrated in only a handful of the largest tech companies. Most other stocks did not participate nearly to the same degree. Finally, a look at prior recessions shows that stock gains in the middle of a bear market are common. In the last 50 years, every recession except one has experienced a strong price advance before giving way to new market lows that occur between 3-6 months before the recession ends. We think it’s far too early to declare the bear market over.

While it’s impossible to assign an exact reason for the recent uptick in stock prices, one of the catalysts seemed to be optimism over the reopening of the economy. Many reports were certainly more positive than expected. However, there is a big difference between a better reopening and a full economic recovery. Even after the impressive job gains in May and June, unemployment remains well above 10% and is likely to lead to sluggish spending and be a drag on growth for quite some time. Also, a recent surge in new coronavirus infections and a new and potentially more contagious strain of the virus have recently slowed reopening in many states. All seem to point to a more protracted recovery and not the “V-shaped” one that many recent stock buyers have been betting on.

The rally also seems to have been fueled by unprecedented government stimulus in response to the virus and an expressed willingness to do more. For example, the Congressional Budget Office estimates that current fiscal stimulus measures will be near $3.7 trillion from March 30, 2020 until September 30, 2021.[ii] And more fiscal stimulus is likely on the way. What’s sobering is Barron’s estimate that the U.S. government will probably need to borrow tens of trillions of dollars to get the economy back on track after the coronavirus pandemic.[iii]  That’s a massive number that, when added to our current national debt and its trajectory before the virus, could end up impairing GDP for decades to come. Further, massive stimulus needs to translate to consumer spending, which may be slower than some expect, especially with the continuance of social distancing.

On the monetary side, the Federal Reserve (Fed) has also provided trillions of dollars in stimulus to help the economy recover to pre-COVID-19 levels. Despite that support, Fed Chair Jerome Powell recently stated that the levels of output and employment remain far below their pre-pandemic levels and are unlikely to fully recover until the public is confident that the disease is contained.[iv]  The unfortunate fact that there has never been a successful vaccine produced for any coronavirus adds uncertainty to the containment timetable. Further, while some investors are justifying today’s higher prices on the belief that earnings will greatly eclipse pre-COVID-19 highs, based on our analysis of NIA earnings, government stimulus tends to shrink as the private sector starts to recover. That means it may be many years before we see significant earnings growth above the previous highs.

Lastly, we believe fundamental valuation ultimately matters. Even though valuation multiples are not a reliable market-timing tool, they unquestionably affect the magnitude of long-term future returns. Simply put, the lower the starting valuations, the higher the potential return. Unfortunately for investors, we believe pre-COVID-19 stock market valuations were very high compared to historical averages, even when adjusted for the prevailing low level of interest rates. Thus, even when the economy fully recovers and starts to grow, stock market returns may be limited. As you will read in next section (“Following the Fundamentals”), profit growth will be a key piece to the puzzle.

No one can tell exactly how this book will end, but we do know there are many chapters yet to be written. Many aspects of the world have already changed. Many more will undoubtedly change in the future. Yet, some things will never change, including the human nature to take risks (even when not warranted) because the fear of missing out on the upside is such a powerful emotion. Hamilton Capital’s dynamic investment process remains intact and was designed with these types of difficult and uncertain times in mind. To unleash the full compounding potential of your investments, we employ a forward-looking, research-driven process that is both dynamic and repeatable. Assets are viewed as opportunities and possibilities, not mandatory holdings. Our goal is to continuously align the investments you own with today’s attractive opportunities and steer them away from unacceptable risks.

Right now, we believe the world is fraught with more significant risks than opportunities, and COVID-19 is just one of them. The trade war, the election, and the increased potential of high levels of both inflation and deflation are also on our list of concerns.  Even though it’s challenging, we’re patiently waiting for the odds to line up in your favor. While we’re working hard for a storybook ending, we continue to turn each page cautiously, one at a time.

Following the Fundamentals May Periodically Result in Feelings of Loneliness

Understanding the relative attractiveness of any investment opportunity requires the dispassionate evaluation of today’s price relative to the future cash flows that can be reasonably expected from that investment.  This needs to be compared to what you’d receive from taking no risk at all. Anything short of that analysis is speculation, which is no better than an uninformed guess in terms of the odds for success – and possibly worse, if it rides in the wake of where “the crowd” is taking markets at the moment.

To evaluate equity prices specifically, we must understand where corporate profits are headed, as those cash flows must compensate you for the significant risk and uncertainty involved in buying stocks, relative to what might otherwise be earned from, say, government bonds. This is why understanding where corporate profits are going is one of the most critical tasks in our dynamic investment process, especially when stocks appear as expensive as they do today.

While we conduct a similar analysis on the cash flows of every specific asset class we can access, we put a great deal of weight on the U.S. Bureau of Economic Analysis’ (BEA’s) National Income and Product Accounts measure of corporate profits (NIPA or NIA earnings). This is a consistent measure of the profits of all of our nation’s corporations, from the largest public company to the smallest private one. Among the many reasons we like this measure is that NIA earnings has historically led other measures of earnings and thus we believe it helps us assess the fair value of equity prices more accurately. Plus NIA earnings takes into account our federal government’s deficit spending that typically augments our economy in times of weakness, like today. FDR’s New Deal is perhaps the clearest example of the government using its spending power to put people back to work and support economic activity when there may have been far less without that stimulus.

As you read in our opening piece (“The Rally”), our government has already committed to $3.7 trillion taxpayer dollars in stimulus, with considerably more being debated at the time we’re writing this. Historically, government spending has averaged about half of all corporate profits over the very long term. The government’s contribution to profits is significantly less in times of growth and more in times like these. In the most recent cycles, government spending has come quickly and in large amounts at the beginning of a crisis and then tapered off as the private sector begins to recover. It’s possible that our government may contribute more than 100% of corporate profits in 2020, as much of the private sector may lose money due to the economic shutdown enacted to contain the pandemic. Government spending is keeping us afloat, as it has in previous times of economic stress.

As we’ve written before, NIA earnings has been relatively flat for the last five plus years. Comparing NIA earnings to the S&P 500 index price, it’s clear that most of the S&P 500’s share price gains since 2014 have come from an expansion of the price/earnings (P/E) ratio (i.e., investors being willing to pay a higher valuation and thus accept a lower future return) and a reduction of outstanding shares through debt-financed stock buy-back programs (driving higher earnings per share more than higher total earnings). Flat NIA earnings broadly tells us that total economic profits have not done much over that time period. Furthermore, the S&P 500 itself represented 70% of total NIA earnings in 2019, with small, medium (mid-cap), and private companies contributing much less. This is one reason why the P/E ratios of small and mid-cap companies and private-equity buyout multiples have all expanded rapidly in recent years. Put simply, real earnings growth was quite meager even before anyone had heard of COVID-19, and valuations appear to reflect expectations for ever higher earnings. 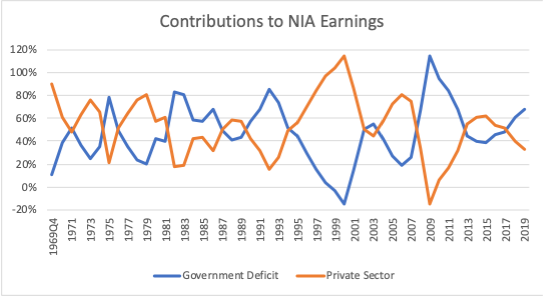 Fed Chairman Powell has said publicly that the private sector may not recover fully until 2022, even with some optimistic assumptions. It takes a very long time for employment to recover to previous levels and confidence to fully return. This suggests that it’s overly optimistic for investors to expect the private sector to produce record profits in the near term. It may well take several years at least.

When evaluating equities, the future cash flows in later years are discounted more heavily because there’s greater uncertainty around them as compared to those just around the corner. While the government can, and likely will, stabilize earnings for a time, unless they continue to run incredibly large deficits for many years, which has its own set of risks, corporate profits are unlikely to sustain new highs until the private sector is at full strength again. If we cannot expect a full recovery until 2022 or beyond, we find it unappealing to pay record valuations today, even when compared to a very modest risk-free return. As patient investors, it seems much more prudent for us to avoid significant risk of capital loss, earn a modestly positive return in low-risk assets, pick a few spots where prices appear to be more reasonable, and patiently wait to fully invest until fundamentals begin to look attractive once again.

Please see the links below to review important disclosure information